It’s hard to believe the first quarter of 2014 has come and gone.  The first day of Winter is just over a month away!  Though the Sunshine State may not yet realise it, with warm weather and a Brisbane property market showing no signs of hibernation in 2014.

The 2013 median capital city residential property market finished up recording a healthy growth of approx. 9.3%, with predictions of continued growth in 2014.  This can be contributed in part to changes in monetary policy and rising confidence levels. 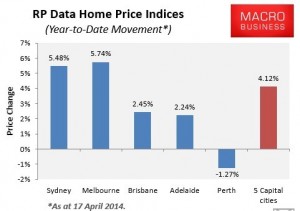 Brisbane and Adelaide property markets were fairly subdued during 2013 however industry experts are tipping Brisbane property to have a much brighter 2014.  And if history is any prediction of the future, Brisbane typically trends 12 to 18 mths behind Sydney and Melbourne, so this could be Brisbane’s year!

The month of March saw dwelling values across the capital cities rise 2.3%, finishing the first quarter of 2014 with a 3.5% capital gain in values.

Early indicators are showing that the wind is possibly starting to come out of Sydney and Melbourne markets’ sails.  It is questionable if the strong growth pace experienced during 2013 can be sustained with many experts tipping these markets are at or close to their peak.

Low interest rates have fuelled property capital growth.  However, recent consumer data displays concerns over interest rates.  The Reserve Bank of Australia may need to consider how to best manage the pace of capital gains if the market doesn’t correct itself.

Market performances are mixed amongst the State economies and with numerous other variables including employment rates impacting interest rates; several experts believe rates should remain on hold, in the short-term at least!

While there’s been bad news on the manufacturing and services front, property is looking stronger in 2014.  Many may come to rely on the building and construction industry in 2014.

Promising numbers on population growth, and stimulation in other sectors such as tourism, also provide good demand for construction.

Predicted improvement in global conditions during 2014 would see the major developed markets expand for the first time in four years.

This positive global growth will provide a significant boost to the Australian economy and confidence.  The transition from high levels of consumer cautiousness to more spending will further business activity and investment; ultimately benefiting the economy and growth!

Face You Tube
Designed By The Web & Design Studio