How Sydney is set to soar: Incredible 3D images show how the city’s skyline will shoot up beyond 300m in the next 20 years

‘The work is a result of three years’ intensive research where we’ve looked at the city, block by block, how the city is used and how it can grow to provide for the needs of people visiting, working and living in the city in the future,’ Lord Mayor Clover Moore said on Thursday.
Under the plan, business will go upwards while the commercial core of the CBD will also grow west towards Barangaroo and south to Belmore Park near Central Station.
‘Central Sydney has limited capacity to grow north, west and east because of its natural geography and harbour surrounds … which limits potential future renewal,’ Ms Moore said.
Yet concerns have been raised about the plan’s potential to favour commercial development over residential.
‘A mixed-use city is essential but I worry that the City of Sydney seems to be discouraging residential development in its strategy,’ former NSW Department of Planning executive director Chris Johnson said.
‘The strong preference is for commercial towers. Residential-only towers are not allowed.’ 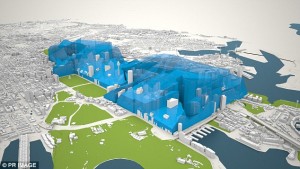 Ms Moore says the priority on business comes as residential developments have encroached upon the city’s ‘productive’ space.
‘We need to protect and increase the amount of productive floor space to maintain Sydney’s economic vitality and resilience,’ she said.
The city says it’s identified locations where ‘tower clusters’ of buildings reaching 300m or higher could be built without too much shadow and blocking of sunlight.
Current local environment plans restrict building heights to 235m, but individual buildings have been able to negotiate heights with the City of Sydney.
All new towers will also have to go through a competition process to meet design standards, the council says.
The plan has already received positive responses from the government of NSW Premier Mike Baird, the Department of Planning and the Sydney Business Chamber, the council has confirmed.

Face You Tube
Designed By The Web & Design Studio